Why can I only vote to migrate to Meta, instead of another S-E Site?

I recently flagged a post for moderator attention, as it had a couple of problems with it:

This is the question I'm referring to. 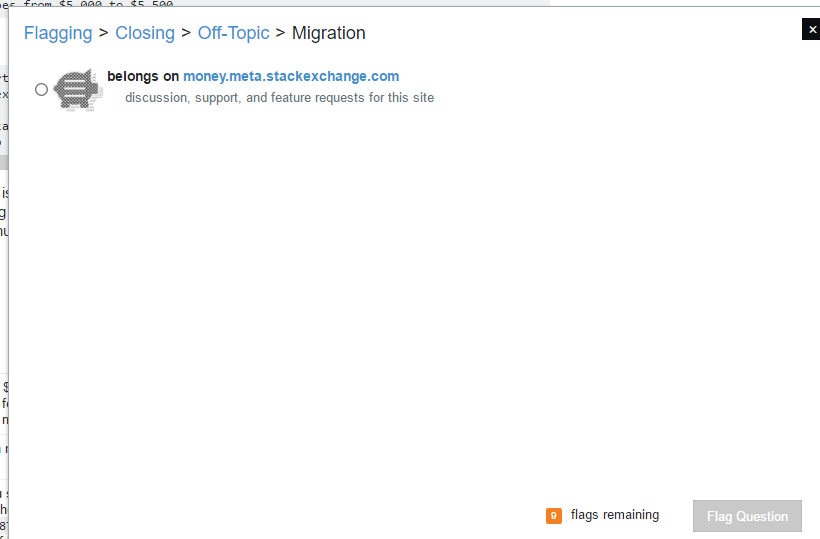 My question is: What determines which sites a member of the community can flag for migration to?

Side-question - In cases like this, was it innapropriate for me to flag for moderator attention? What would have been a better avenue for bringing attention to this? Posting a question (like this) in Meta, or chat?

The list of migration targets is configured by StackExchange staff, who would probably take advice from the elected site moderators and perhaps look for consensus on meta. Note that moderators can always migrate something anywhere, and people fairly often raise custom flags asking us to do so.

If we were going to add an extra migration path, Law would be the first choice - it gets the overwhelming majority of migration requests. But TBH I'm not keen. Something should only be migrated if it's both off-topic here and a good question, and in my experience that's pretty rare.

Personally I'd suggest focusing first on closing a question on this site if you think it doesn't fit - i.e. flag/vote to close. If you also really think that it would be a good question on another site, raise the custom flag as well. But don't do it just because you think another site is a better fit for the question. In this case according to your own assessment, just flagging to close would have been appropriate.

Not the answer you're looking for? Browse other questions tagged discussion flagging migration .

Welcome!
This site is for discussion about Personal Finance & Money Stack Exchange. You must have an account there to participate.
Help

0
Can we flag a question that belongs on Quant.SE?
2
What standard flag should I use for questions asking about the reasons a government made laws affecting personal finance?
0
Add "vote to move to another site" under "vote to close" options

7
Economics.SE is closing, do we want some of their questions?
2
How do I indicate that I've addressed a flag, without flagging the post myself or marking the flag as invalid?
1
Standardization amongst moderators for flag status
0
Add "vote to move to another site" under "vote to close" options
7
Declined flags for extraneous comments on my answer
2
Why was this question about Student Loan minimum payments deleted?
2
What standard flag should I use for questions asking about the reasons a government made laws affecting personal finance?
0
Is a fictional account of an iffy personal financial transaction on topic?
2
Why was my flag on a troll question declined?