This is the privilege list (communications) for our Stack:

The issue I am opening for feedback is whether we want to lobby for a higher level required to comment. Put a different way - "Do we feel that very new members are using comment inappropriately, or are they giving us reason to want to raise the threshold?"

In this case, the Money.SE mods do not have the power to do this, it has to be done at a higher level. We would need strong member support, and a number of examples of comment threads that we would have avoided. Please provide those examples in the answers.

I would find having a site-specific requirement for such a basic privilege confusing and irritating. (Not that the misuse of comments isn't irritating...) Note that unlike many other privileges (edit, vote to close), commenting is set at 50 reputation for both graduated and beta sites.

Money is not in such a bad shape comment-wise; as far as I can tell, The Workplace and RPG sites have a bigger problem with comments turning into mini-forums. The Workplace has a custom setting: Comments without upvotes are now hidden if a question has more than two answers. This may be a more practical solution than a custom level of reputation.

But probably, a network-wide solution is called for: one proposal currently under discussion is to rename "add a comment" link.

Specifically on this site I haven't seen abuse of comments. There are some that have attracted more comments.

What I have seen is that quite a few new users even with the low threshold need to make some valid comment, end up posting an answer ... this then gets flagged to be converted into comment.

In my view an alternate view is we build a delete option for comment which is currently restricted to Mods to wider users based on reputation. This would mean that it is more clean and ideally put up comments via review tasks.

No, I am not in favor of increasing the rep required to comment.

First, I agree with Michelle that there should not be different rep/privilege levels on each site. It should be a network standard.

Second, as someone with the network-wide bonus privilege, I enjoy being able to comment on other sites where I don't have a lot of rep yet. I'm not willing to give that up.

Spam is non-existent in the comments the way it is. Almost all spammers have a rep level of "1", so this would be the case even if we lowered the threshold.

It is true that there are a few people that abuse the comment space. But if we raise the comment rep requirement to 75 or 100, would this really stop them? If they are able to earn 50 rep, they will probably be able to earn 100 without too much difficulty. I don't want to punish new users that are trying to learn in good faith to be valuable contributors to the site.

Instead, I like the proposals that call for comments being able to be downvoted. I'd like to see some rep loss for each comment downvote received, and an automatic delete of any comment that reaches a low score, maybe -5. That would help the mods police the comments a little, and dis-incentivize the posting of bad comments.

I'd be strongly against this. We already have an intermittent issue of "I posted this comment as an answer because I don't have enough rep to comment" issues. This would make it worse.

Interestingly, joining the global meta reminded me of my issue:

I think comments are somewhat specific to the topic at hand and don't necessarily agree that participation in another stack necessarily indicates a user's understanding of the rules sufficient to start commenting on every topic. I think we get a lot of low participation comments for a couple of reasons: 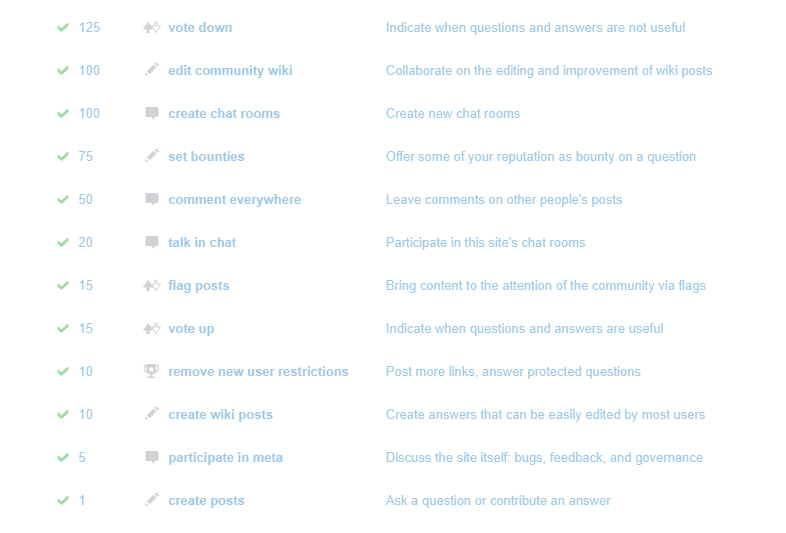 A comment, by the stack exchange definition, is meant to address the author of the question or answer. I almost think a solution is not a rep level required to leave a comment, but a rep level required to see a comment. Either you wrote the question or answer and the comment is pertinent to what you wrote, or you're of sufficient rep to participate in moderating/editing questions and answers. This obviously leaves the possibility that multiple comments with the same suggestion will be left but to some extent I think the fact that comments are public invites opinionated comments rather than useful ones, then the opinionated comments invite further comments and a discussion. I think if comments were primarily invisible or visible only to those who could actually affect the edit suggested there would be no point to leaving a comment of opinion.

Ultimately if comments must be public, I think the core of the problem is that comments are "free." There's no "bad comment" stick the way there's a "bad question/answer" stick, I'll never lose my precious rep points for continuously posting useless comments.

Not the answer you're looking for? Browse other questions tagged support .

3
Would my question be on-topic for Money.SE?
1
Is there a tag for building loan contracts?
3
Candidates For Editing and Reopening