"Finally, the Area51 scorecard is only one metric we use [to determine graduation]." So what else do we need to do?

I do not fully understand what the parameters are that graduate the site. It's like studying hard for an exam and writing the paper, but not knowing how the answers are evaluated or what the passing marks are :)

First, the statistics for all the sites can be viewed here. Next, if we look at current graduated sites compared to Money SE:

Similarly, on other parameters like "Number of Users" or "Percentage answered", Money SE is above quite a few graduated sites.

So, I think to me the options are:

I've been concerned about the lack of specificity for some years now. Stack Inc.'s policy appears to be "we'll know it when we see it, and not before then". These metrics we are given are to keep us busy working on some of the things that are important, but not to actually set the bar, because the "other stuff" they're looking for is nebulous and subjective. Frustrates me.

Personally, I don't see the harm in graduating our site now, given metrics like those above, and it would make oh-so-many of us happy to finally pass and get a real site branding/design treatment ... that would help make it a home, instead of these temporary-looking "beta" living quarters.

Nevertheless, to anybody reading, can you please complete the current site self-evaluation? Thank you.

There are no "parameters that graduate the site."

You're struggling against a broken metaphor I've been trying to get repealed for a year now. Graduation isn't like high school where four years or 44 credits means picking up your diploma at the door. That's the entire point behind

Does this site have a chance of succeeding?

"Graduation" is a horrible misnomer that suggests that if you are not graduating, you're somehow being held back while the bigger kids go on to real world. That is not the case, and you're getting all worked up over labels which mean very little in this context.

The Meaning of Graduation

Every once in awhile, a site takes off like a shot with inexorable growth that virtually guarantees the future success of a site that comes with long sustained growth.

The Earmarks of a Graduated Site 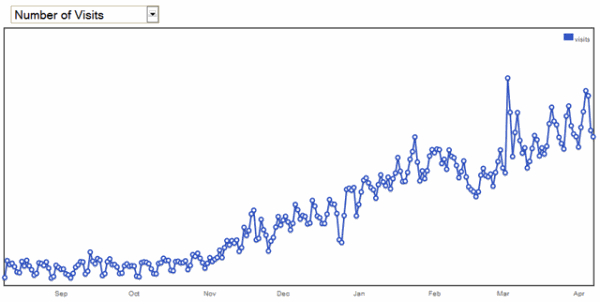 In our nomenclature, that when graduation occurs.

A more accurate term might be something like "tenure" — the permanent post you achieve when you've reached a point of self-sufficiency and inevitable lock-in. Similarly, some sites achieve sustainable growth that all but guarantees you can keep it all going for the foreseeable future. That's the major difference between graduation (sic) and beta.

So Why Not Just Graduate Us?

You're trying to force some sort of binary decision on us, that we should right now either guarantee the future health and growth of this site, or shut it down in failure.

The Growth of Money SE

In terms of lock-in and long, sustained growth, you're not there yet. You can make light of our lack of specificity when that will happen, or act like we're just pulling some sort of charade just to shroud the process in secrecy, but I don't know any other way to say it beyond 'you simply are not there yet.'

So why are we in beta?

Personally, I'd rather call this phase of your growth — (drum roll) — nothing. Traditionally, the beta label was used to give notice that a product or service was in the wild west days of development… a time when things are subject to wild changes when you're still establishing what a site is about. Ideally, a beta label should be removed after a few months, once you assert your identity and scope.

Stop thinking of yourselves like you're some sort of helpless underling. You are a fully-featured, fully-functional Stack Exchange site helping people get answers to their questions with a 98% success rate. That's quite an achievement.

On a more resolute note, we are working out a new workflow to create and grow Stack Exchange sites. The changes being proposed will one day apply equally to both proposed and active site. So maybe my disagreement about the labeling issues carries over to another day. Who knows.

But stop worrying about graduation. You got a new design only six months ago that was designed to let you carry on without looking like some sort of half-baked start-up.

Not to minimize your concerns, but I'm with you on the whole labeling thing. But also consider the reality that you're building up a canon of knowledge where 2,500 people visit every days and have about a 98% chance that they'll get a good answer to their question. The horrors.

Not the answer you're looking for? Browse other questions tagged discussion site-promotion .

5
Nearing Beta Completion Site scores still a worry [Edit: We are doing good Now]
4
Future of Money SE, What should be the next logical step
12
WOOHOO! Seven Hundred Days in Beta!
2
Reopen reqest for Vanguard MMA question
3
Will new attention brought by graduation coupled with the loss of privileges for some users cause a problem when the site graduates?
4
Is there a way to eliminate vindictive downvotes?
9
What does PF&M need from its moderators?